How to Tie the Troutman Special Jig Streamer

The eve of Pennsylvania's opening day of trout season found me without a plan. I typically fish alone but the opening day of trout in Pennsylvania is a tradition that is best spent with friends. I hit up my buddy Jeremy Troutman to see if he had plans and if he wanted to fish in the morning. Ironically we were both thinking of hitting the same new water. I have fished the lower section of this stream and the top head waters, but never where he and I were both thinking of fishing. We set a plan to meet early in the morning. I spent the rest of that evening tying up some of my favorite brookie flies in prep for the next days adventure.

Jeremy and I met up and started our hike to the stream we had both been wanting to try for a while. There was a smaller tributary that we decided to hit first on our way to the target stream.  Both of the streams were a little bit of a hike up some steep terrain so we wanted to get an early start. We arrived at the first stream, and worked around two hundred yards or so.  We soon realized this stream was not going to be the ticket. I feel that because of the way the mountain was positioned the sun wouldn't be hitting the stream for quite a while. The are temps were in the thirties but the water temps on that stream were extremely cold.  We both made the executive decision to head back and go to the main stream we wanted to fish.
My first fish on the new stream was a beautiful hen brookie. I love catching the decent sized hen brook trout as it is a good indication of the health of the stream. This girl came out from and undercut bank and wacked my crayfish fly. Jeremy and I would continue up the stream and have one of the best brookie days we've ever had. We would often find ourselves finding a great pool and whomever was up to bat would catch a brookie, and the other angler would pick up a fish on the next cast. When blue lining it is good practice to leap frog holes while fishing with others.
One pool that I knew had to have at least on big brook trout in it soon showed itself. As luck would have it I was up to bat. I landed my crayfish fly perfect and picked up a nice little brookie. I called Jeremy up and he hooked into a beauty. Size wise, it was the biggest fish of the trip. At this point I knew that Jeremy had one heck of fly pattern. I don't like to peek into other anglers boxes but I had to ask Jeremy to show me in better detail what streamer he was using. He showed me an, at the time, unnamed jig streamer.
When I looked at Jeremy's streamer I could see instantly why this streamer was a such fish catcher. It had a lot of movement it its tail. The added micro legs gave added movement but also gave a great illusion of a lateral line when the fly was stripped. Jeremy put soft hackle be hind the bead which also gave the fly a pile of movement in the "fin area" of the streamer. My analysis of this unnamed streamer is that it will catch all species of fish anywhere in the country.

We Continued upstream and were having a nock out day. We were not keeping track of numbers as every fish we caught just blew our minds with how beautiful they were. Not often do you get two doubles on gorgeous native brookies on one stream, but we did. The fish shown above were our stopping point for the trip. Our trip was amazing and I had a new fly design to play with. I didn't get the materials that Jeremy used on his streamer but had an idea on what I wanted use to mimic his fly. I'll now show you how I tie the Troutman Special. 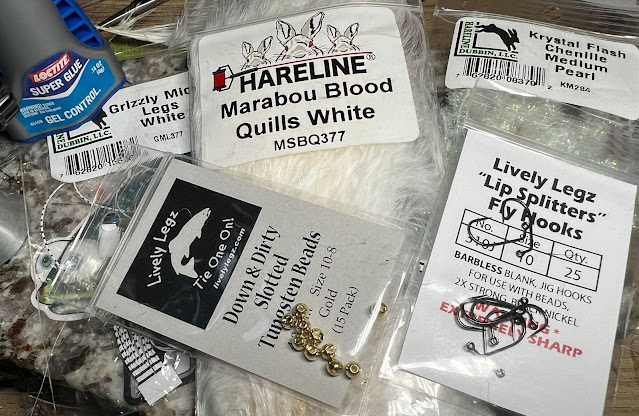 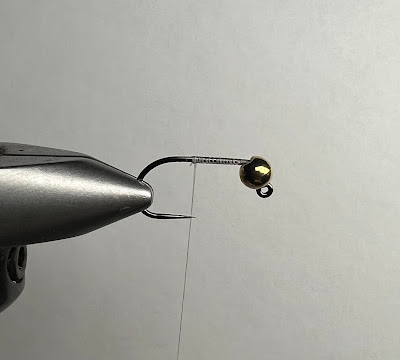 First I thread the hook and fully cover where I plan on weighting the hook shank. This will help the weighted wire from slipping when wrapping. 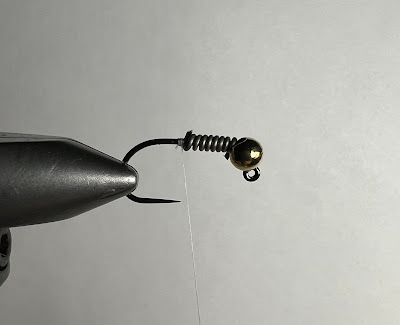 Next, I wrap roughly half the shank with weighted wire. I stop at where I will be tying my tail in. This will give a smooth transition to wrap my chenille. 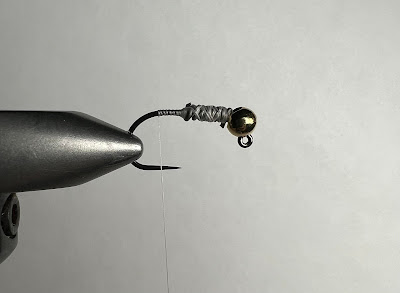 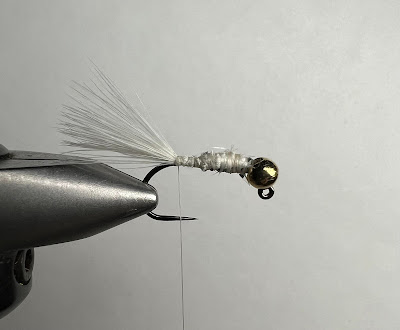 Tie in your marabou. Depending on the quill, you may be able to tie it in all the way to the bead. You don't want the fly to be too bulky though. 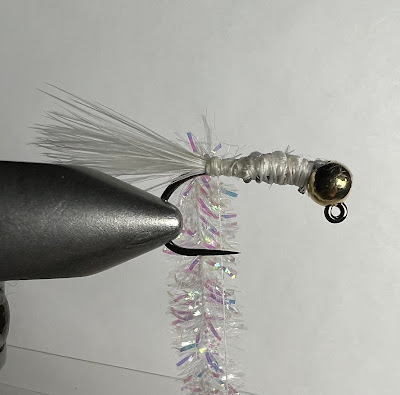 Tie in the chenille. Remove a few fiber strands so that only the core thread is visible. This will reduce bulk and also give you better adhesion to the shank of the hook. 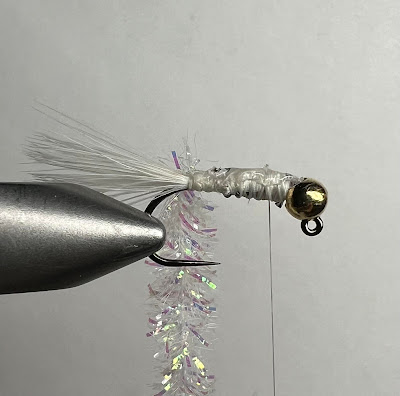 Once I have the chenille tied in, I cover the hook shank with Loctite super glue gel control adhesive. This will really lock my chenille to the hook shank, and avoid any potential slippage due to the amount of material  that is wrapped around the hook shank for this pattern. 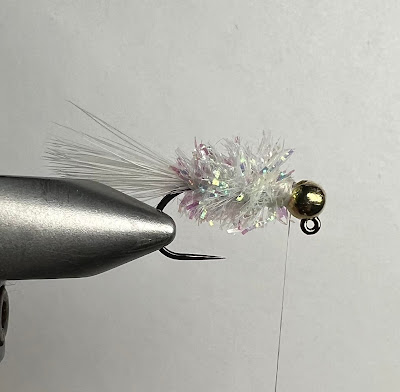 Wrap your chenille towards the bead, but leave a gap around 1/4 - 3/16" so you have room to tie in the legs and soft hackle. 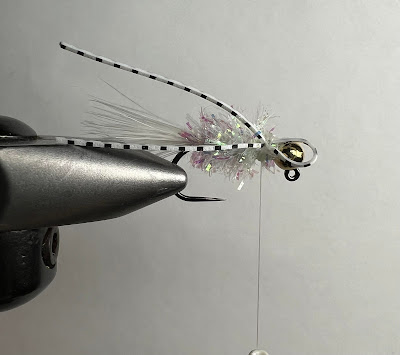 I take a complete grizzly micro leg fiber, and cut it from the cluster. Then fold that fiber in half and cut it. Each fiber will give you two legs. I fold the cut fiber in half and tie in the legs. I make 2-3 wraps and then be sure the legs are aligned with the hook shank. You want to try to keep these legs where the lateral line of the fish would be. When you strip the fly those legs will go in a straight line and give the lateral line look. 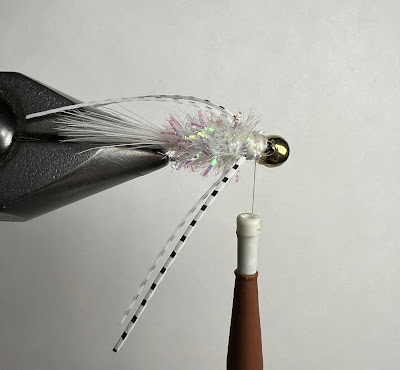 Repeat this step on both sides of the hook shank. 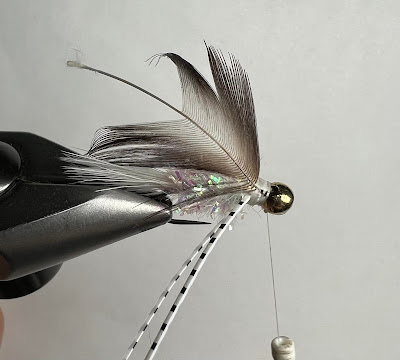 Tie in your soft hackle. I like to use one of the breast feathers of the mallard drake I shot in the fall of 2021. I like the way that the drake mallard breast feather has dark brown tips and fades to white. This gives a nice natural appearance to the fly. 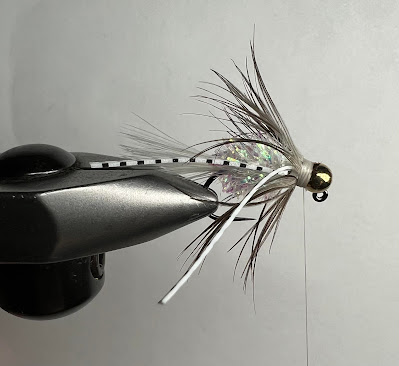 Once you have your soft hackle locked in make sure that the soft hackle fibers all point backwards. This is probably the most tricky part of tying this pattern. 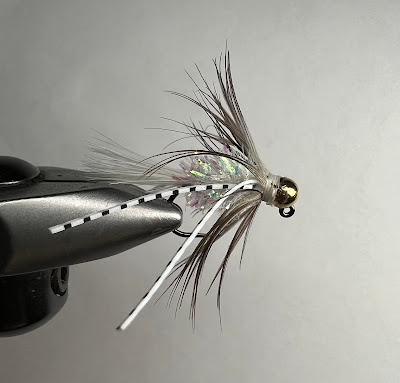 Whip finish and consider the fly done. I like to take a small drop of superglue gel and place it where I snipped my thread. You can also put a collar on the fly of dubbing if you'd like. I don't often tie other tyers patterns but watching Jeremy pull out fish on pools after I had fished them made me want to give this pattern a go. You can sub in a plethera of other colors to this pattern. White and my Dace variations are my top producers.
One of the best things about this fly to me is that Jeremy used to purchase flies from me when he first got into fly fishing. I knew that he would love to tie his own flies, so after a few orders I told him that I would no longer be selling him flies.  This was not the best business practice but I knew that he would really love the art. He picked up a vise and hit the ground running. My favorite part of fly fishing these days is to help new anglers and tyers get into the sport. Jeremy has become a really great fly tyer over the last few year.  To see him create a pattern of his own that I want to mimic is just awesome and there is nothing better than that to me. Give the Troutman Special fly a try, you won't regret it.

Fly Tyer Mike
I am an avid fly tyer and fly fisherman. My favorite aspect of fly fishing anymore is helping new fly anglers get started on the right foot. I am from Cambria County, Pennsylvania and reside in the Allegheny Mountains. I also enjoy fly fishing, turkey hunting, and archery hunting for deer the most, but am active in all outdoor activities. I have a wife, a son, and twin daugthers. Being the father of three younger kids poses challenges but also great fun and memories. There is nothing better than seeing your children in the outdoors. I love nature and hope to promote a message that encourages others to feel the sae way.